Our team vision is to consolidate our assets to evolve our position in the Quebec market. Our energy drives us to realize integrated visual architectural projects that respect the personality and the essence of the company of our customers.

Values ​​of the company

We believe in the importance of good customer service, which is the foundation of our success. We believe that a trusted partnership with our customers, suppliers and staff is the ideal approach. We also believe that open and honest communication is essential.

Respect for the environment is a constant concern that dictates our choices when it comes to improving our manufacturing techniques and innovating. We encourage our employees to improve their skills in order to offer our clients, at all times and at all levels, quality services.

Alain Marchand began his activities under the name Le Pro du Pinceau and makes signs using the "hand lettering" process. The company is located in Cap-de-la-Madeleine and occupies an area of ​​700 sq. Ft., Half of which is divided between the basement of the family home and a small attached garage. To buy a delivery van and a projector that allows the enlargement of the drawings and logos, Alain Marchand sells his Camaro and his motorcycle.

The company is growing rapidly and has to move. The area devoted to quadruple manufacturing and there is a space for offices where Linda, wife of Alain, takes responsibility for the administration.

The Brush Pro buys its first truck with aerial platform, which allows it to maintain the signs of its customers and install its products.

In a desire to continue its growth, the company then resorts to telemarketing. This innovative approach at the time was a great success and helped distinguish the Pro Brush from its competitors.

After seeing its area triple two years ago and having a showroom and a sales office in a brand new building, Le Pro Brush officially becomes the Professional Signs.

The company wins the first Radisson for the Quebec Product Award at the CEDIC Gala Awards. A study conducted that same year by the Montreal firm Boisvert, Mizoguchi and Associates inc. ranks the company among the 25 largest sign makers in Quebec.

Les Enseignes Professionnelles is making a first in Quebec by designing, manufacturing and installing a huge 300 sq. Ft. Electronic billboard, entirely computerized, along Highway 755. A $ 250,000 project! The same year, Alain Marchand was elected businessman of the year by the Chamber of Commerce of Cap-de-la-Madeleine.

Les Enseignes Professionnelles won the Marketing Award at the CEDIC Gala Awards and was a finalist in four other categories, including Company of the Year. That same year, the company was certified as meeting the standards of the Canadian Standards Association (CSA).

Les Enseignes Professionnelles are moving into the Trois-Rivières industrial park: new facilities that are perfectly adapted to the growing production and the maintenance of increasingly high performance standards in the sign industry.

The company erects a superb double-sided sign of 30ft X 13ft at the axis of Autoroute 40 and Boulevard des Récollets, where it operates. Thanks to the strategic position of the brand which gives it an exceptional visibility, the notoriety of the Professional Signs grows instantly and the projects multiply. The company proudly displays its expertise and know-how.

The company receives a contract from Petro-Canada in Nova Scotia for the manufacture of the highest-grade sign in its class in Canada. It is a double-sided sign installed in V with a height of 110 feet. Its manufacture required more than three months of work and the sign was assembled on the installation site by the team of Les Enseignes Professionnelles.

The field of the signs is in effervescence and the projects are more and more innovating. An example? Quartier DIX30 project located in Brossard, the largest building in its category in Quebec. The manufacturer? Professional Signs!

It was also in 2006 that the company acquired a new technology in digital printing and cutting (CNC), consolidating its position as an undisputed leader in its field.

Les Enseignes Professionnelles confirm their status as a family business while the children of Alain and Linda are more and more involved in the business. The succession is assured, the ideas are ambitious, the spirits are full of projects, the future is promising!

A major expansion for the Trois-Rivières plant, allowing us to reach nearly 20,000 sq. Ft. Of floor area. The plant also acquires new equipment such as a paint chamber with a baking cycle, a folding machine and a digital cutting machine, and a crane truck that meets the latest technology and meets the highest safety requirements.

Obtaining an important mandate in the development, manufacture and installation of nearly 600 feet of bus shelters and street furniture in the Laval region allows us to enter a new specialized market for which our team will propel its expertise in the processing of raw materials such as aluminum, stainless steel and glass.

At the dawn of the 40th anniversary of the fouding of the company, Mr Alain Marchand, owner, is proud to announce that his daughter, Ms Sabrina Marchand, has taken over the reins of the family business. A member of the compagny since 2006 and holding the positions of sales director and business development manager, Ms Marchand is committed to the company's current and future growth. 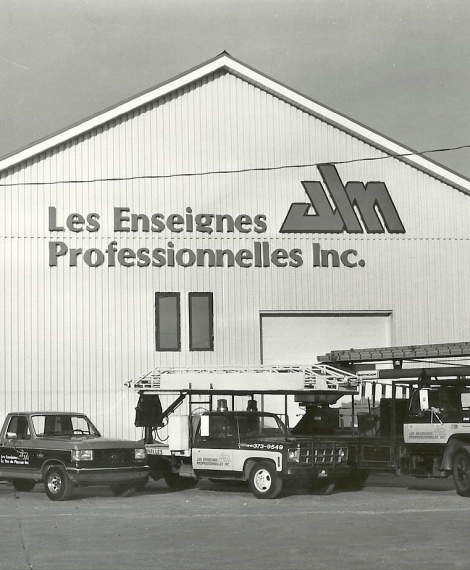